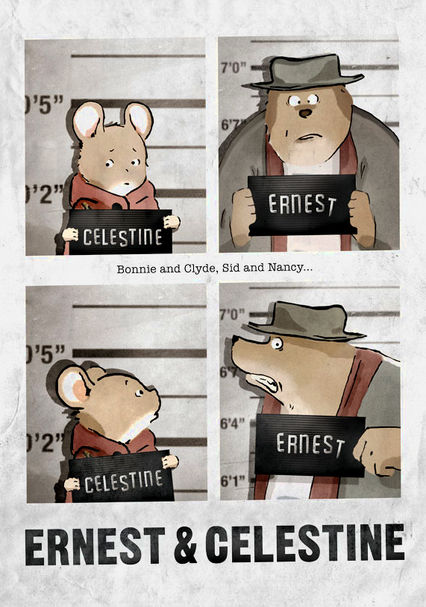 2012 PG 1h 20m Blu-ray / DVD
Adapted from a popular children's book series, this sweet animated drama portrays the friendship between an orphan mouse and a free-spirited bear. After persuading Ernest the bear not to eat her, Celestine the mouse ends up moving in with him.

Parents need to know that Ernest & Celestine is a lovely hand-drawn French animated movie about the unlikely friendship between a mouse and a bear. Dubbed in English, the critically acclaimed Oscar-nominated film is the story of finding friendship where you least expect it and defending that friendship against discrimination and prejudice. There is some occasional insult language ("dumb," "moron") and a few scary moments when the two pals are being followed and then put on trial -- as well as a frightening bedtime story about mice-eating bears. A fire nearly kills a few characters, but they're saved at the last minute.

The first scene involves a mean old mouse lady telling a scary story about a hungry bear to her orphan charges. She makes frightening shadows on the wall as she tells the story, Both the mice and the bear communities get angry, scared, and even violent toward Ernest and Celestine for breaking their rules about fraternizing with the enemy. When a family of bears finds a tiny mouse, they immediately try to grab and kill it and then lay dozens of mouse traps to do the job. The rats ready a huge "bear trap" to punish Ernest if he's found guilty. The police angrily stalk and arrest both of them. Both judges are such in a frenzy, they won't stop yelling even after a fire breaks out that nearly kills them.

The movie has a powerful message about friendship transcending superficial differences such as what you look like or what community you come from, and it reinforces the idea that unconditional love and friendship should be defended and treasured. Both characters are artists, which their respective societies don't seem to appreciate, but Ernest and Celestine support each other's artistic ventures. Some families may be uncomfortable at the idea that the central characters have broken their society's rules, not to mention steal and run from the police, but overall, this is a celebration of creating family-like bonds where you least expect them.