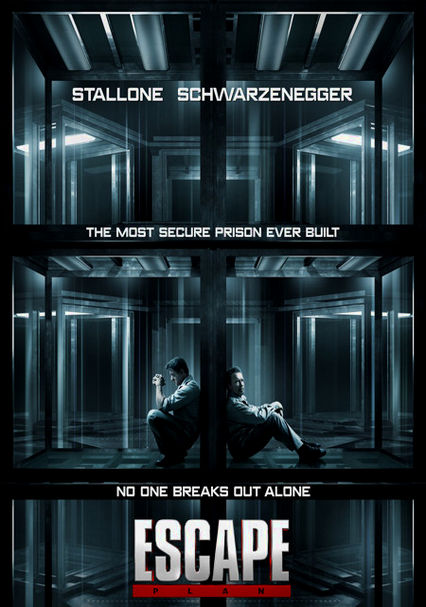 2013 R 1h 56m Blu-ray / DVD
Framed and thrown into an escape-proof prison, structural security expert Ray must use all his know-how to break out. Ray and a fellow inmate dodge the jail's corrupt warden and guard to track down who's behind the setup.

Parents need to know that Escape Plan is an action movie starring two of the most popular veterans of action movies: Sylvester Stallone and Arnold Schwarzenegger. Not surprisingly, the movie contains tons of over-the-top violence, often without consequence. There's fighting, shooting, and blood. Prison guards torture inmates, and bloody wounds are stitched up in a doctor's office. Language is also strong, with multiple uses of "f--k" and "motherf--ker" as well as minimal uses of other words. There's also some minor sexual innuendo, including references to a "whore" and a hand motion referring to oral sex. The mood is light, and the movie is dumb fun for fans.

Stallone flirts with Amy Ryan; there's a joke about her bad cooking and how he can "complain in the morning." Schwarzenegger initiates a fight by insinuating that a man's mother was his "favorite whore in Marrakech" who could really "polish a helmet," while he makes oral sex motions with his hands. He also makes a crude drawing of a naked butt to antagonize the warden.

Tons of over-the-top action-movie violence, with dozens of faceless guards being shot and killed. A fair amount of blood is shown, especially when one of the good guys is shot in the stomach, and one of the bad guys falls down a flight of stairs and smashes his head. The inmates fight a great deal with lots of punching and pummeling, the guards are shown beating inmates into submission. Some scenes take place in a doctor's office with bloody wounds being stitched up, or needles being injected. A character is tortured with a high powered hose in his mouth. There's also a big explosion.

Perseverance and teamwork are the positive themes. At one point, the main character loses heart and begins to think that maybe, this time, he can't do it. But eventually, with help from his friend, he gets his strength and his resolve back. He goes on to solve a tremendously difficult puzzle, against tough odds. However, the movie contains tons of violence with no consequences.