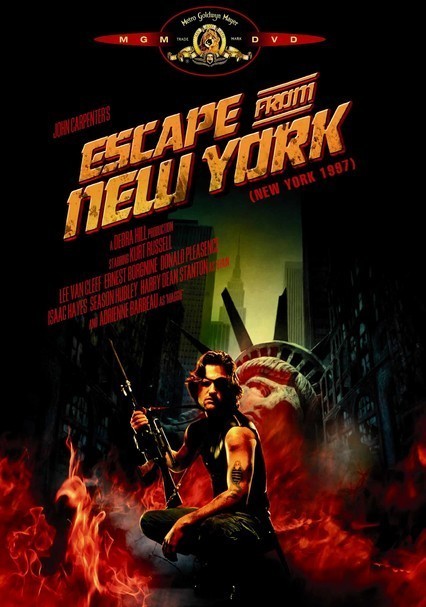 1981 R 1h 39m Blu-ray / DVD
Soaring crime rates prompt the United States to turn New York City into a maximum-security prison -- which is precisely where the U.S. president (Donald Pleasence) lands when he's forced to bail out of Air Force One in director John Carpenter's action classic. Condemned criminal and former war hero Snake Plissken (Kurt Russell) rescues the commander-in-chief, but on one condition: The President must promise to grant Plissken his freedom.

Parents need to know that violence in this bleak vision of the future includes gunfire, crossbows, thrown knives, land mines, and gladiatorial death bouts with fists and clubs (though except for a severed head there's little explicit gore). Do-not-do-this-at-home stuff includes whiskey used as a firebomb. Swearing is at the typical R-level. The hero smokes cigarettes. There's a quick glimpse of bare breasts. An atmosphere of cynicism and darkness pervades, including a negative depiction of a US president and a police-state America.

Blink-and-you'll-miss-them bare breasts, as NYC prisoners manhandle a girl. Low-cut outfits for the leading lady. Plissken makes an angry joke about "playing with myself." He has a suggestive tattoo around his crotch.

Gunfire, explosions, beat-downs, and gladiatorial death bouts with fists and clubs. A severed head. Characters stuck with arrows and knives. Implication that high-tech tiny time bombs are implanted in someone's head. A hijacked plane crashes into a Manhattan skyscraper as in 9/11, but only a radar-readout is shown.

The rotten Big Apple here represents the worst that could happen under a harsh, uncaring government. Along with that comes a theme of mistrusting authority and "the Man." There are no real heroes; the closest thing is a commando-turned-robber, motivated entirely by self-interest (or other people coercing him). Even he is disgusted by the callous attitude of the hostage US president (and, by extension, the society that president represents).