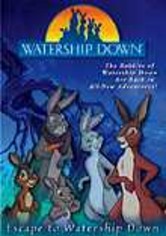 1999 NR 1h 0m DVD
Richard Adam's best-selling book (which spawned a popular British animated film in 1978) gets renewed life in another installment about the close-knit and courageous rabbit family that endures despite many perils. In this animated feature, Hazel and Bigwig have left their warren to escape destruction, but they face more danger along their journey from malicious farm animals, shadowy humans and their own kind.