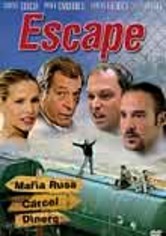 2003 NR 1h 32m DVD
Director Benito Rabal's lively comedy follows a trio of crooks (played by Sancho Gracia, Pablo Carbonell and Carlos Fuentes) who meet in a paddy wagon that promptly crashes, allowing the men to make a getaway. Taking it on the lam, they end up at a seaside hacienda, where a hot blonde (Elsa Pataky), some missing plutonium and the Russian mob put a kink in the threesome's plans. Screen veteran Luis Cuenca appears in a small role as an attorney.