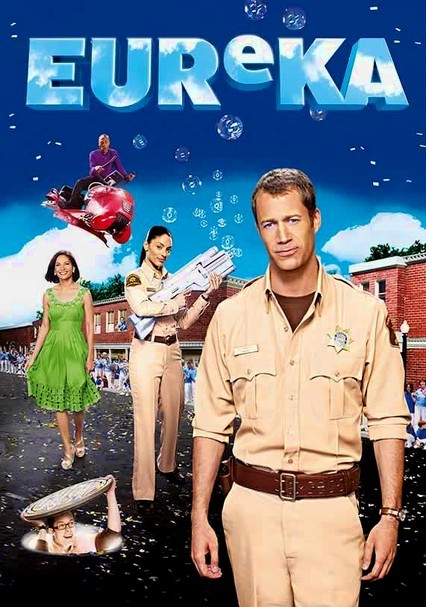 2006 TV-14 5 seasons
When he takes the job of sheriff of the little town of Eureka, Ore., ex-U.S. marshal Jack Carter (Colin Ferguson) discovers that the community's quiet citizens are actually brilliant scientists working for a dangerous top-secret research facility. As he works to fix the damage caused by experimental technology gone disastrously awry, Carter keeps a watchful eye on his rebellious daughter. Jordan Hinson co-stars in this offbeat sci-fi series.

The small-town secrets are bigger than ever in the second season of this original Sci Fi Channel series that chronicles the experiences of a former U.S. marshal (Colin Ferguson) who uncovers a community of übergeniuses in the Pacific Northwest. After discovering that they had been happily living in an alternate reality created by a grieving Henry (Joe Morton), the residents of Eureka try to get back to their own brand of normalcy.

The quantum chaos continues in the second half of this Emmy-nominated sci-fi drama's third season, in which Jack Carter (Colin Ferguson) loses his job as sheriff of Eureka, a top-secret community where the government nurtures the country's brightest scientific minds. Meanwhile, Jack must also deal with threats to his daughter Zoe's (Jordan Hinson) life and an attraction to visiting scientist Dr. Tess Fontana (Jaime Ray Newman).

Back from the year 1947, Sheriff Jack Carter and the scientifically minded citizens of Eureka brace for the repercussions of a bold, new project. But the revelation of unexpected secrets could derail the town's plans.

When the starship Astraeus lands on Earth, its crewmembers discover they've been gone for four years and the residents of Eureka have moved on with their lives, forming new relationships and a new repressive regime that controls Global Dynamics.

Parents need to know that this series starts out with a few eyebrow-raisers -- including a brooding teenage girl with a nose ring and a potty mouth -- but it quickly morphs into something that's actually OK for family viewing, within reason. While it's not meant for young kids, the show is fine for older teens, who will likely connect with the hellion described above, and might encourage them to give science a second look.

Adult characters engage in some sexually charged innuendo, and sex is sometimes used as a weapon. Flashes of skin also pop up occasionally, including shots of women's cleavage and men's naked torsos.

The town experiences several instances of strange, bloodless violence -- including a cop who loses his leg, a cow who loses half its backside, and lots of explosions. One character murders another by poisoning her cup of tea.

Relatively mild: "bitch," "bastard," 'hell," "suck," and the implication of "motherf---er" (a character is cut off before he can finish the word).

The overall implication is that science can be pretty cool if used correctly. Alternately, the show reveals that terrible things can happen when the wrong elements come together.