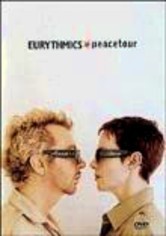 2000 NR 1h 36m DVD
Ten years after the Eurythmics released their final album, Annie Lenox and Dave Stewart reunited to record the album "Peace" and launched a historic worldwide concert tour. This show was recorded in London on Dec. 6, 1999, at a benefit for Amnesty International and Greenpeace. Featured songs include "Sweet Dreams (Are Made of This)," "Here Comes the Rain Again," "Would I Lie to You?" "Missionary Man" and "Walking on Broken Glass."