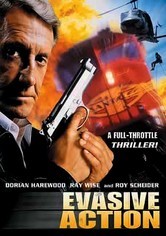 1998 R 1h 34m DVD
When officials from a federal penitentiary put several of the country's most dangerous prisoners on a train to transport them to a new facility, it's a recipe for disaster as the jailbirds seize the opportunity to make a break for it. Roy Scheider stars as Enzo Marcelli, an infamous Mafia don who finds himself in the midst of mayhem when his convict cohorts hijack the train in this fast-paced indie thriller helmed by Jerry P. Jacobs.