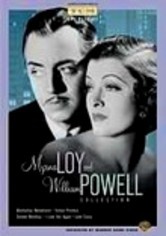 1934 NR 1h 18m DVD
John Prentice (William Powell) is a prominent attorney, too busy with his cases to realize the effect his dedication is having on his wife, Evelyn (Myrna Loy). Hurt and lonely, Evelyn commits an indiscretion that lands her in a nightmare of jealousy, blackmail and murder. Harvey Stephens, Isabel Jewell, Edward Brophy, Una Merkel and Rosalind Russell (in her film debut) co-star in this adaptation of W.E. Woodward's novel.