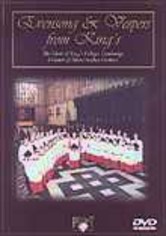 2004 NR 1h 30m DVD
Stephen Cleobury directs the Choir of King's College in this inspiring concert filmed in the school's magnificent historic chapel in Cambridge. King Henry VI founded the college in 1441, ensuring that each day services would be sung in the chapel -- one of Britain's cultural and architectural treasures. This concert features pieces from the medieval, Renaissance, Baroque, Romantic and 20th century periods.