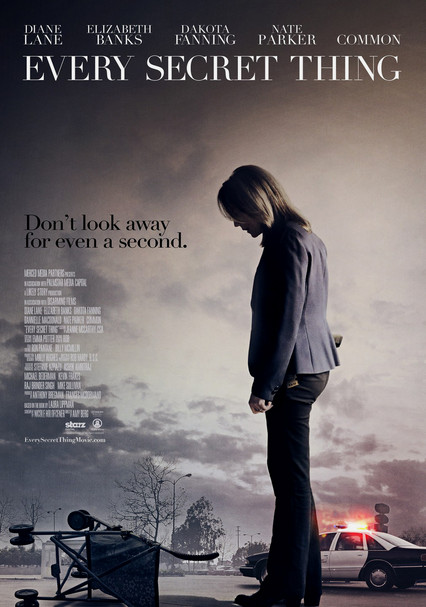 2015 R 1h 33m DVD
Convicted of killing an infant when they were 11-year-old girls, Alice and Ronnie -- now 18 and just out of jail -- find themselves suspects again. This time, it's a 3-year-old who's missing ... and no one in town can forget the young women's pasts.

Parents need to know that Every Secret Thing is a complicated drama that spans two time periods, with a tragic kidnapping in each. There are some tough scenes to watch involving young children in danger. Teen characters are simultaneously callous and cruel and damaged and victimized (one extended scene shows a teen girl harming herself); parents seem to veer back and forth between desperately sad and horribly manipulative. Expect some drinking (an adult offers sips to two 11-year-olds), and one character frequently smokes cigarettes. There's also a fair bit of swearing, notably "s--t" and "f--k." A teenage girl in a juvenile detention facility becomes involved with an adult guard; they're shown kissing and hugging.

A teenage girl in a juvenile detention facility becomes involved with an adult guard. They're shown kissing and hugging. Other characters discuss the couple's sexual activities, as well as the unexpected consequences

A girl slaps an adult during an argument. An extended scene shows a teenager injuring herself. A young child is kidnapped from a store -- it's disturbing to see how quickly a child can vanish. In another sequence, two 11-year-old girls kidnap a baby, who becomes sick because they don't know how to care for an infant.

Don't make snap decisions about people; people who seem the most sincere and caring may in fact anything but, while those who seem to be most likely to cause trouble may actually be trying to avoid conflict.

A mother frequently drinks wine at home and at meals; in one scene she offers small sips to two 11-year-old girls. One character frequently smokes cigarettes.