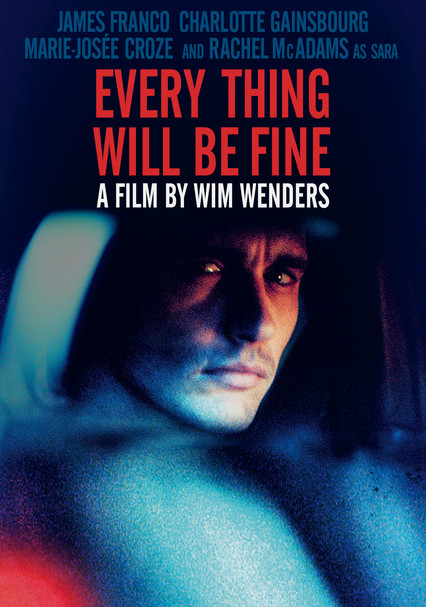 2015 NR 1h 59m Blu-ray / DVD
While driving in a snowstorm, struggling novelist Tomas Eldan accidentally hits and kills a child. His guilt about the tragic incident lingers for years, sending him into an emotional tailspin and prompting an agonizing reassessment of his life.

Parents need to know that Every Thing Will Be Fine is a relationship drama that stars well-known actors James Franco and Rachel McAdams but is unlikely to appeal to younger audiences. The movie not only revolves around a heavy theme -- the death of an unknown child in a car accident -- but it's contemplative and plays out across many years in a way that most teens will likely find tedious. There's quite a bit of substance use -- to the point of a character's suicide attempt -- as well as some drinking by a not-quite-legal-adult. There's also a scary moment when someone is trapped during a freak accident at a local fair. Families who do see the film together may want to discuss healthy and unhealthy ways to handle grief and tragedy.

A child dies in a car accident. Another child is trapped in a freak accident at a fair.

Occasional use of words including "s--t" and "damn."

Tragedy is random and unavoidable, and overcoming it can be slow, painful, and all-consuming. Positive message about how creativity can flourish after grief.

A man smokes marijuana a few times. Christopher has a beer with Tomas; it's unclear whether he's of age yet. A character seems to want to drink himself to death.