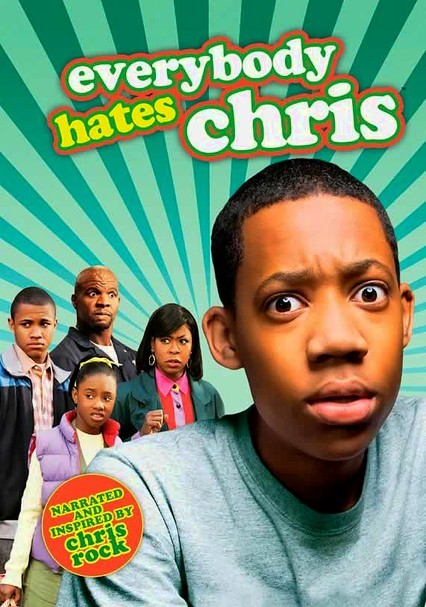 2005 TV-PG 4 seasons
The real-life childhood of Emmy-winning comedian Chris Rock serves as the inspiration for this sitcom, which stars Tyler James Williams as a put-upon Brooklyn seventh-grader who suffers through all kinds of ego-bruising outrages at school and home. Facing junior high bullies, Chris turns on the charm; confronted with his parents' money problems, Chris pitches in to help -- but try as he might, things just never seem to quite go his way.

It's 1982, and 13-year-old Chris (Tyler Williams) is the oldest of three siblings living in Brooklyn's tough Bedford-Stuyvesant neighborhood. Life is anything but easy, with strict parents (Terry Crews and Tichina Arnold) who work all day and expect him to care for his younger brother (Tequan Richmond) and baby sister (Imani Hakim). Narrated by comedian Chris Rock, this hilarious series is a product of his own childhood memories.

Chris Rock narrates this hilarious look back at his childhood, circa 1982. As his strict parents (Terry Crews and Tichina Arnold) try to get by in Brooklyn's Bedford-Stuyvesant neighborhood, they look to 13-year-old Chris (Tyler James Williams) to help out with his younger brother (Tequan Richmond) and sister (Imani Hakim). Vincent Martella and Jacqueline Mazarella co-star in this NAACP Image Award-winning hit sitcom.

Chris (Tyler James Williams) may be movin' on up to high school, but life has not gotten any easier for the Brooklyn teenager, who still finds himself in this final season on the receiving end of mishaps, misfortunes and terrorizing butt-whippings from his parents. Tichina Arnold, Tequan Richmond and Terry Crews also star in this Golden Globe-nominated series, based on the childhood experiences of comedian and series narrator Chris Rock.

Parents need to know that this warmhearted sitcom is funny and smart, but its themes are too mature for younger kids. Chris' parents make empty threats when their kids get into trouble; these comments are portrayed in a comedic light and aren't meant to be taken seriously (in fact, the parents are strong role models overall, teaching their kids responsibility and helping family members learn from mistakes). There are jokes about drugs (becoming a "crackhead"), and the "N" word is used sparingly (usually to make a specific point). There's also some mild kissing and jokes about teen pregnancy.

Chris gets into occasional fights at school (most are started by a bully). In one episode, he accidentally breaks his brother's hand after taking a karate class. Mom Rochelle often threatens her kids with physical punishment, but she never follows through (it's all played for laughs).

The show emphasizes the importance of family and friendship, as well as standing up for yourself and being true to who you are. Characters learn from their mistakes and apologize when they're in the wrong.

Some episodes involve Chris wanting particular items, but none are name brands. One episode revolves around an issue of Playboy.

References to becoming a "crackhead" after a character almost fails a math test.