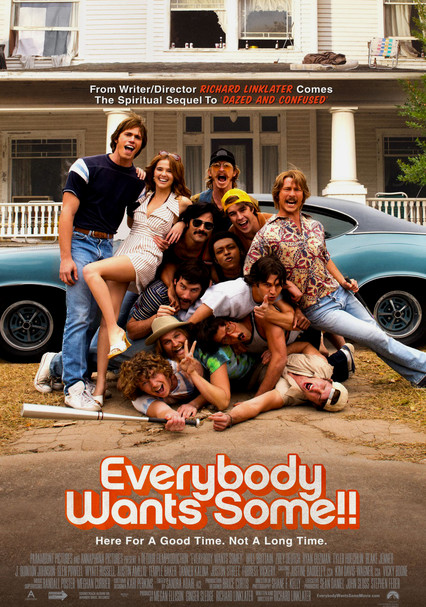 2016 R 1h 56m Blu-ray / DVD
Set in the 1980s, this campus comedy chronicles the triumphs and humiliations of a group of freshman friends intent on making the school's baseball team -- while exploring a brave new world of adult temptations off the field.

Parents need to know that Everybody Wants Some!! is a comedy from Richard Linklater that can be seen as a successor to his cult classic Dazed and Confused. Language is extremely strong, running the gamut from "f--k" to "s--t" and many others. College-age characters drink beer (and sometimes harder alcohol) and often smoke pot (bongs, joints). Men try to pick up women and sometimes succeed, kissing and sleeping casually with many of them. A topless woman is shown, as are men's naked bottoms; there's also plenty of ogling, innuendo, groping, etc. Violence is limited but includes a brief bar brawl, pushing and shoving in a mosh pit at a punk show, a painful-looking "knuckles" game (with bleeding, swollen knuckles), and mud wrestling. Though it's full of mature content, it's also funny and irresistible, with some soulful passages and "be yourself"/"join a team" messages.

Themes related to the value of both being yourself and finding the right team to be part of. But questionable behavior isn't punished, and even though rules are broken, there aren't any consequences.

College-age characters often smoke pot (via joints and bongs) and almost constantly drink beer, as well as some hard alcohol.