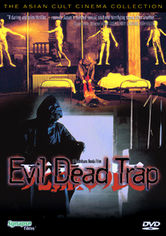 1988 NR 1h 42m DVD
In this Japanese cult horror film, talk show hostess Nami (Miyuki Ono) receives an anonymous videotape in the mail. When she plays it, she's shocked to view what looks like a murder -- that is, a snuff film. With the help of her faithful crew, she discovers that the tape originated in an abandoned ex-military base in the middle of nowhere. As the team splits up to investigate, they're drawn deeper into a deadly nightmare.