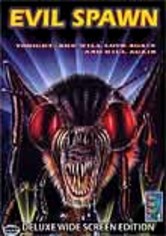 1987 NR 1h 40m DVD
In an attempt to delay the inevitable, B-movie star Lynn Roman (Bobbie Bresee) -- who's desperate to land leading roles again -- injects an "anti-aging" serum developed by mad scientist Dr. Zeitman (John Carradine). When the elixir transforms the actress into a grotesque, gigantic insect, she seizes the opportunity to put the bite on her competition in this gruesome horror film directed by Kenneth J. Hall.