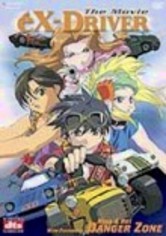 2004 NR 1h 30m DVD
Kousuke Fujishima's trippy manga comes alive on-screen in this feature film about a futuristic world literally run by cars. Humans are mere passengers who have to entrust themselves to their vehicles, but when things go awry, as they sometimes do with technology, the results are far from pretty. Thanks to the eX-Drivers, who insist on piloting their gas-powered transportation themselves, swift rescue is on the way.