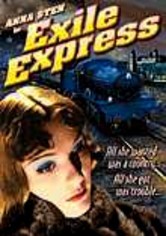 1939 NR 1h 11m DVD
Beautiful European import Nadine Nikolas (Anna Sten) and reporter Steve Reynolds (Alan Marshal) must thwart a gang of international spies in this romantic comedy with a dash of suspense. Nadine's chances of becoming an American citizen go down the drain when she's implicated in a murder. Just before she's deported, however, Steve steps in to help track down the real killers. Jerome Cowan, Jed Prouty and Walter Catlett co-star.