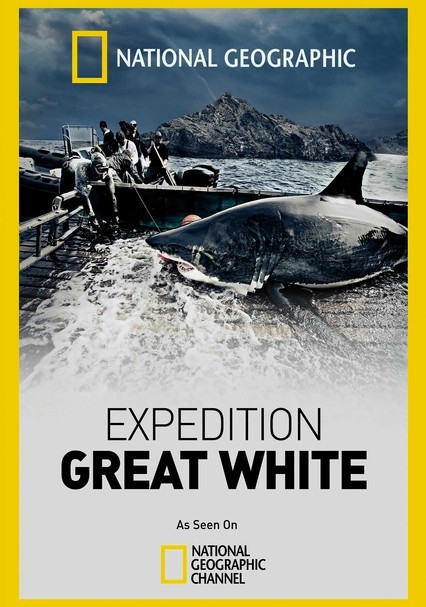 2009 NR 0h 50m DVD
This National Geographic documentary follows marine biologist Dr. Michael Domeier and a crew of intrepid fishermen on their daring mission to catch a great white shark, attach a tracking device to its fin and release it safely back into the water. Hoping to gather data that will help them understand and protect all great whites, Domeier and his team must first find a way to subdue one of these magnificent predators out on the open sea.

Parents need to know that this educational series -- which follows a team of researchers to a Mexican island to study the great white shark -- looks more dangerous than it is. Scientists capture the huge predators and perform a variety of tests, all in the name of science, and there are very few incidents involving any true peril. Despite the potentially exciting topic, the work of catching the sharks and performing the tests can start to seem repetitive, limiting the appeal to short-attention-span viewers.

No sex or nudity, though the researchers often discuss the reproductive habits of sharks.

The researchers are constantly in close proximity to large, very dangerous sharks, though there is rarely any kind of attack.

Scientific research is important, and the team here is willing to put themselves in danger to help people learn more about a dangerous creature. There may be no obvious, immediate benefit from learning more about the mating habits of great white sharks, for example, but knowledge can certainly be its own reward.

The crew works hard during the day, but when their shifts are over they are happy to relax with a few beers.