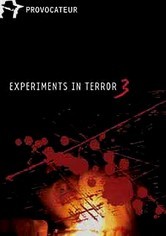 2008 NR 1h 27m DVD
Avant-garde filmmakers foray into the darkest depths of the human psyche to deliver genuine chills in this uncanny collection of horror shorts, the third installment in the Experiments in Terror series. The films include Carey Burtt's portrait of real-life serial killer Richard Chase (using a cast of dolls), a bloody psychological drama about identity, a silent short in which an aging sailor is transformed into a fiend and much more.