Explore the Wildlife Kingdom: Amazon: Secrets of the Golden River 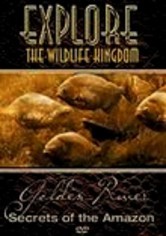 Explore the Wildlife Kingdom: Amazon: Secrets of the Golden River

2005 NR 0h 50m DVD
Peer through the lenses of some of the world's most celebrated nature and wildlife photographers and descend into the Amiga River Basin, the largest rain forest on earth. Pulsing through the center of these pristine tropics is the Rio Negro, also known as the Golden River, containing the purest water on the planet as well as a spectacular array of aquatic life. Narrator Grant Goodeve lets you in on some of its most amazing secrets.