Explore the Wildlife Kingdom: Dolphins: Tribes of the Sea 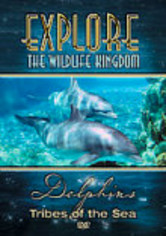 Explore the Wildlife Kingdom: Dolphins: Tribes of the Sea

2005 NR 1h 0m DVD
This installment of the Explore the Wildlife Kingdom series focuses on the dolphin, one of the most beloved animals of the ocean and a creature whose impressive intelligence has fascinated researchers for decades. Through underwater footage and interviews with marine researchers, the program explores the dolphin's penchant for interaction and co-operation with humans and the animals' capacity for language and affection.