Explore the Wildlife Kingdom: The Hidden World of Africa 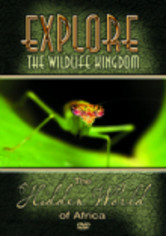 Explore the Wildlife Kingdom: The Hidden World of Africa

2005 NR 1h 0m DVD
In this installment of the Explore the Wildlife Kingdom series, a team of talented cinematographers captures the rarely seen side of Africa, presenting a fascinating glimpse at some of the smallest creatures on the planet. Revealing the pint-sized critters and tiny invertebrates that make their homes alongside some of the world's largest animals, this eye-popping program takes viewers inside the hidden universe of Africa's bush and savannas.