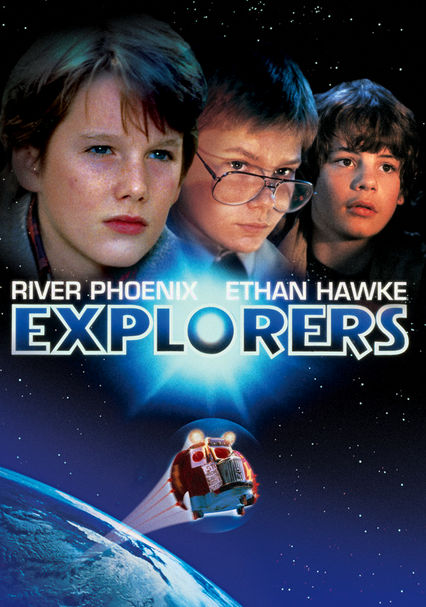 1985 PG 1h 49m DVD
Dreaming of space travel, teenage science whiz Ben Crandall and his best friend Wolfgang create an interplanetary spacecraft in a homemade laboratory. It isn't long before the two pals are zooming off to another galaxy.

Parents need to know that, overall, Explorers depicts smart, curious junior high kids who stumble upon a way to make their dreams of space flight a reality. But there's a scene in which they drink beer, and they work unsupervised with a welding torch and an electric saw as they construct their spaceship. One boy mentions his dead mother; another, preparing for a trip to outer space, writes his will as a precautionary measure. There's also some lower level cursing by kids ("ass," "hell," "pissed") and some sexuality. Younger kids may be scared by a suspenseful scene in which a giant mechanical "spider" frisks the boys after they arrive on the alien spaceship.

A boy kisses a girl. A boy fantasizes about an alien species of "Amazon women" who want to breed a new race; his friend calls him a "pervert." A boy has a crush on a girl in his junior high class. Discussion about removing a woman's clothes.

A bully punches a boy in the face; the two briefly fight in the schoolyard. Some use of dangerous tools (welding torch, electric saw) as the ship is constructed. In one scene, a giant mechanical "spider" frisks the boys. A parent's death is mentioned.

Kids use several curse words, including "ass," "pissed," and "go to hell."

Although they neglect their schoolwork (which causes their grades to suffer), the movie's young characters are depicted as smart, curious kids who team up to build and pilot their own spaceship.

The boys affix a NASA sticker to their homemade spaceship.

Three young boys share some swigs from a bottle of beer.