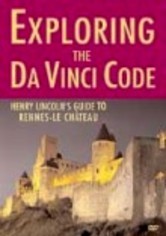 2005 NR 2h 0m DVD
Many of the controversial theories found in Michael Baigent, Richard Leigh and Henry Lincoln's book &NFiHoly Blood, Holy Grail&NFi_; formed the foundation of Dan Brown's blockbuster novel &NFiThe Da Vinci Code&NFi_;. In this thought-provoking documentary, Lincoln serves as your personal guide through the French countryside and the mysteries it holds, from the isolated streets of Rennes-le-Château to the supposed secrets of Bérenger Saunière.