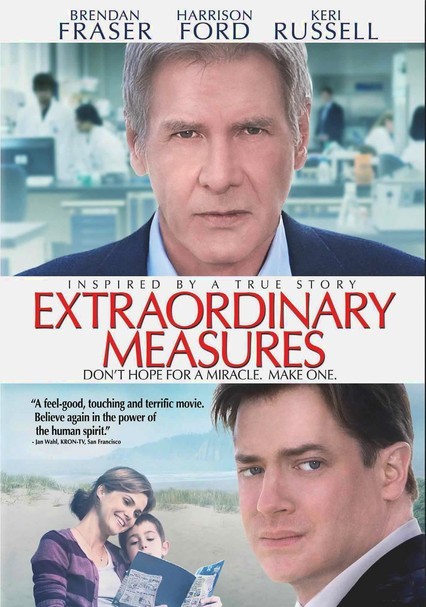 2010 PG 1h 46m Blu-ray / DVD
After their two young children are diagnosed with a rare genetic disease for which conventional medicine has no cure, John and Aileen pin their hopes on the work of unconventional scientist Dr. Robert Stonehill and form a company to develop a drug.

Parents need to know that despite its PG rating, this Harrison Ford medical drama features the kind of mature themes and strong language (including "s--t," "bulls--t," and "a--hole") usually associated with PG-13 movies. The movie focuses on a couple dealing with their children's life-threatening genetic disease; consequently, several scenes depict sick kids who are near death (and their inconsolable parents) -- which might be too heavy for tweens and young teens. The film's overall messages, however, are positive, as viewers see parents doing everything they possibly can to find a way to save their dying children.

John and Aileen kiss passionately a couple of times and in one scene make out on a couch half-dressed after she makes a seductive suggestion about helping him take off his clothes.

Nothing violent, per se, but there are potentially disturbing images of very sick hospitalized children, as well as discussion of a child who has died from Pompe disease. A guard holds a gun in one scene.

The Crowleys and other families dealing with Pompe disease all overcome unbelievable odds to ensure that their children live as long as possible. Their unflappable resolve is inspiring and touching, as is the sweet optimism portrayed by the sick kids.

Recognizable brands include Ford, Kia, Hewlett Packard, Bose, and several mentions and appearances of SpongeBob SquarePants -- both as a stuffed animal and a TV show.

Adults drink socially in a bar and at dinner.