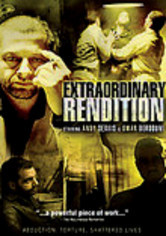 2007 NR 1h 17m DVD
This gripping drama follows the kidnapping of a suspected terrorist (Omar Berdouni) from the streets of London and his hellish journey through isolation, secret prisons, interrogations and torture at the hands of a pitiless government agent (Andy Serkis). Even if he is eventually released, will he ever again be free? Inspired by true events, this film also features Ania Sowinski, Jimmy Yuill and Hugh Ross.