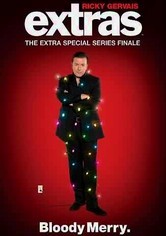 2007 NR 1h 24m DVD
Despite the popularity of his sitcom "When the Whistle Blows," erstwhile extra and current TV star Andy Millman (Ricky Gervais) longs for respect in the industry. His show is critically reviled, but is he ready to sacrifice his success to follow his artistic dreams? And just how far will he go in the name of personal integrity? Stephen Merchant and Ashley Jensen co-star in the finale of this Emmy Award-winning comedy.