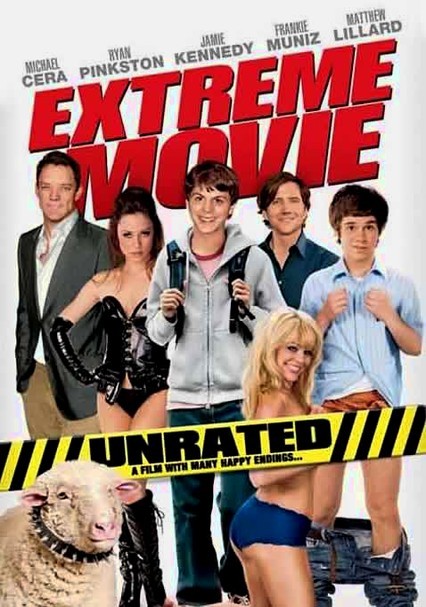 2008 UR 1h 15m DVD
Amiable geek Mike (Ryan Pinkston) chases down the girl of his dreams, while Fred (Michael Cera) looks for love in a chat room and Chuck (Frankie Muniz) and his experienced girlfriend take their sex life to the next (very weird) level. Co-written by comic heavyweights Andy Samberg and Will Forte, this outrageous raunch-fest chronicles the highs and lows of teen lovemaking in all its embarrassing glory. Jamie Kennedy and Andy Milonakis co-star.

Parents need to know that this sex comedy wants to push the envelope for tastelessness and shock. In addition to requisite female toplessness, the camera fixates on a sex toy that depicts a realistic, disembodied pelvis/vagina. Characters are high-schoolers (played by actors who look age-correct, for once) engaged in sexual practices and preoccupations, from basic attempts to lose virginity with a prostitute to bizarre fetishes with dwarves, Nazi regalia, and Abraham Lincoln. Though campy dialogue isn't strewn with swearing (a la Martin Scorsese), pretty much the whole range of profanity is uttered for comical effect, with both clinical and street-slang language. Locker-room humor references pornography, erections, vibrators, flatulence, etc. Heavy drinking in one segment, demeaning black stereotypes in another.

Excessive profanity is uttered for comical effect, with streams of dirty words in particular coming from teachers and old folks.

No positive messages. Demeaning racial overtones in one segment.

Occasional computer logos and clothing labels. Some gag commercials for sex-aid products that are clearly fictitious.

Much drinking and inebriation in one sketch-segment. In another a character (well, a sex doll) commits suicide with an overdose of pills.