Eye of the Eagle II 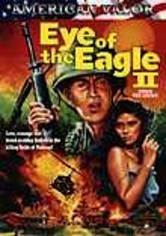 Eye of the Eagle II

1989 R 1h 18m DVD
Oscar-nominated director Todd Field stars in this Vietnam War action-adventure as Anthony Glenn, a solider who befriends a Vietnamese girl named Mai (Shirley Tesoro). When he discovers that she's missing, he spearheads a courageous mission to find her. Soon he learns that a corrupt army officer (Andy Wood) has drawn her into a web of drugs and prostitution. Carl Franklin wrote, directs and co-stars.