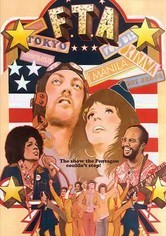 1972 R 1h 37m DVD
Francine Parker's documentary -- which disappeared from theaters after only one week -- chronicles the Pacific leg of the 1971 "Free the Army" tour, the anti-Vietnam War revue featuring a troupe of performers led by Jane Fonda and Donald Sutherland. Consisting of satirical skits, antiwar humor, protest songs and interviews with members of the military, the FTA revue was designed to inspire U.S. soldiers to voice their dissent.