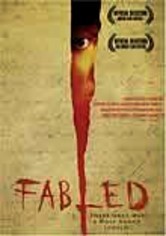 2002 NR 1h 24m DVD
Joseph (Desmond Askew) just had a bad breakup with his girlfriend. What's worse, he thinks she's plotting against him with the aid of their psychiatrist. Oh, and his dog's gone missing. Add in a large, unhealthy dose of guilt and the "fact" that monsters are out to get him, and Joseph has his hands (and head) more than full. J. Richey Nash, Michael Panes and Kathryn Winnick co-star in this allegorical fable directed by Ari Kirschenbaum.