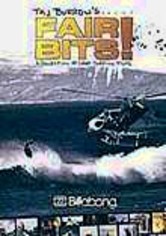 2005 NR 1h 0m DVD
By assembling jaw-dropping footage from a variety of famous surf movie directors, co-producers Emmett and Brendan Malloy deliver a uniquely action-packed film. This unorthodox collection has it all, including helicopter footage from 6-foot supertubes and a sequence with Taj, Rob Machado and Kelly Slater attempting to ride the waves on a variety of oddball items -- among them, a door, a shovel, a snowboard, skis, a guitar case and a coffee table.