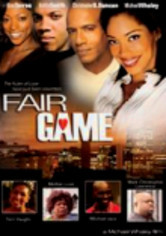 2005 NR 1h 28m DVD
In writer-director Michael Whaley's smart and sexy comedy, urban co-workers Michael (Whaley) and Stacey (Gina Torres) are forced to cohabitate as roommates, only to discover that they have more in common than they once believed. Their mutual attraction builds, but will their devotion to the rigid "rules" of dating -- and the practice of playing silly games -- serve to ruin their romantic potential?