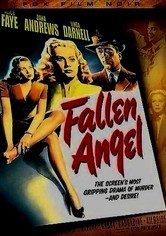 1945 NR 1h 38m DVD
Eric Stanton (Dana Andrews) drifts into a small California town and becomes smitten with a waitress named Stella (Linda Darnell). She, however, refuses to have anything to do with him unless he can prove he has prospects. In short order, Eric connives to wed a wealthy reclusive spinster (Alice Faye) and cash in. But when Stella ends up dead right after the wedding, Eric is the prime suspect. Otto Preminger directs this classic film noir.