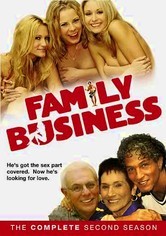 2003 NR 1 season
Filmmaker Adam Glasser lets the cameras capture all the joys, triumphs and ridiculousness of the day-to-day dealings of his family-owned adult movie empire. Joining Adam are his mother and uncle, who meddle and offer their support in equal measure. While Adam deals with the headaches of auditions, production and promotion, he's also in search of something strangely elusive given his career -- the love of his life.