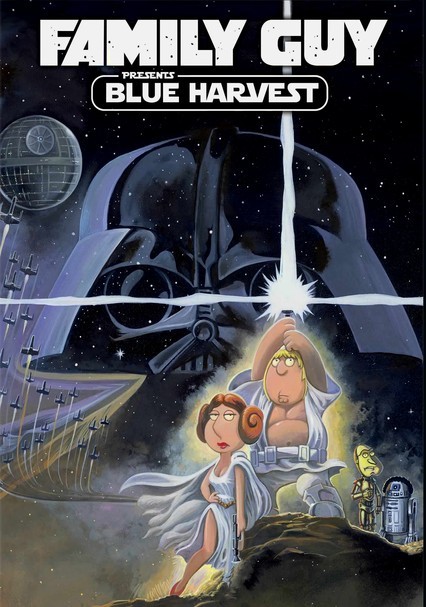 2007 NR 0h 48m DVD
A long time ago in a galaxy far, far away, the cast of "Family Guy" stepped into the plot of Star Wars: Episode IV: A New Hope -- and the result is this hourlong epic that kicked off the show's sixth season. When Princess Leia (Lois) is captured by Darth Vader (Stewie), Luke (Chris) risks his life to save her. Aiding him on his quest are Chewbacca (Brian), a well-spoken Wookiee, and Han Solo (Peter), a bumbling spice smuggler.

Parents need to know that this cartoon satire of Star Wars has some very adult-oriented humor (more verbal than visual), with references to sex, pedophilia, and drug use. The spoof of Star Wars' opening text prologue includes a recommendation of a lesser-known movie for its graphic sexual content. A few borderline swear words are used. Violence, at about the level of that in the live-action Star Wars (except it's all cartoon) includes spaceship and planet explosions, blaster shootings, and a few light saber decapitations. Newcomers to the Family Guy universe might not "get" a lot of insider references and characters.

"Cartoon violence" in the purest form, with spaceship explosions, shootings of characters (mostly bloodless), and a light-saber decapitation gag.

"Holy crap," "hell," "bitch," "penis," "God" (as an exclamation), and, in a DVD extra, George Lucas says "bulls--t." Stewie/Darth Vader does a series of borderline-swear-word excrement puns ("I Sithed in my pants").

While the story technically has some of the same heroic messages as Star Wars, they're secondary to the crass, spoofy humor.

Natural tie-ins to Star Wars, as well as Family Guy merchandise. References to Doctor Who, Airplane, and other, more adult-oriented movies, including the R-rated Lethal Weapon and HUGE plugs for the explicit cable-TV biopic Gia and the Cartoon Network comedy series Robot Chicken.

Social drinking, smoking in the cantina. R2D2 and C3P0 smoke what seems to be a bag of marijuana, and C3P0 complains about "freaking out."