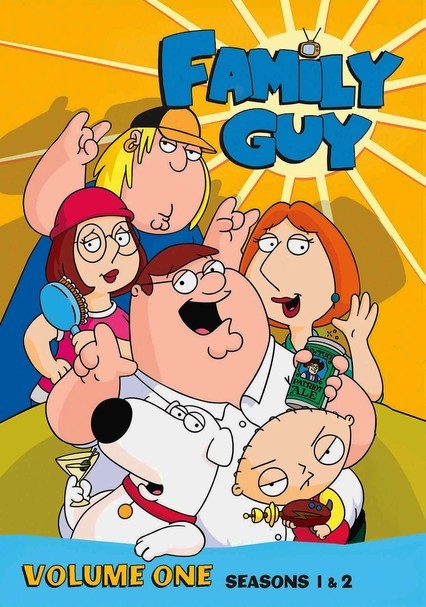 1999 TV-14 4 discs
Witness the Griffin family in all their silliness with these episodes from the first two seasons of the parody-packed animated sitcom. As Stewie aims for world domination, Brian the dog downs martinis and the rest of the family share jabs and laughs.

Parents need to know that Family Guy is very funny; the quirky scenarios can induce giggles or even guffaws in grown-ups. But Seth MacFarlane's show isn't meant to be watched by kids or young teens. Unpredictable is the name of the game in the town of Quahog, Rhode Island, where the Griffin family spends most of its time watching television and getting into trouble. The dog, Brian, and the infant, Stewie, are the most intelligent members of the family -- which might set off a few alarm bells in terms of inappropriate role modeling. Expect frequent sexual innuendo and salty language (of the "bitch" and "damn" variety), as well as some drinking and violence played for humor.

Lots of sexual innuendo and references. Sometimes subtle, sometimes overt.

Plenty of slapstick/violence played for humor, but no main characters face life-threatening injury. Dad Peter owns a gun and produces it now and then.

Pretty frequent use of words like "damn," "hell," "bitch," and "ass," plus lewd references to body parts.

Erratic good deeds at best, character assassination at worst -- there's nothing remotely PC about this show.