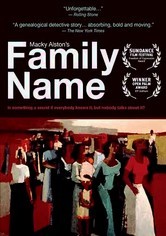 1997 NR 1h 29m DVD
White filmmaker Macky Alston wonders why all the other Alstons in his Durham, N.C., elementary school were black. Embarking on a genealogical journey through Alabama and North Carolina, Alston finds a surprising emotional tale behind his family name. Alston's stirring exploration of race and identity -- which critic Roger Ebert calls a "fascinating detective story" -- won the Freedom of Expression Award at the 1997 Sundance Film Festival.