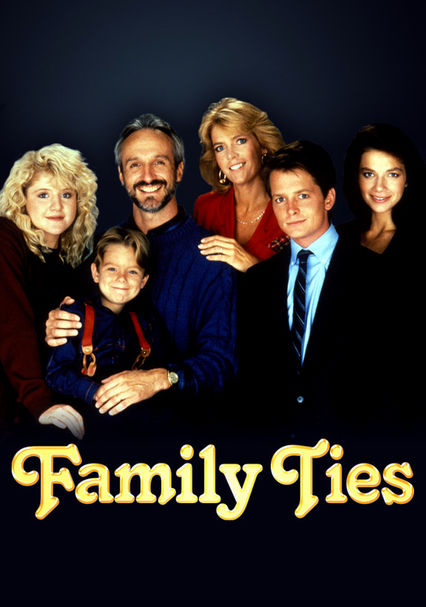 1982 TV-G 3 seasons
This Emmy-winning sitcom centers on proudly liberal, ex-hippie parents Steven and Elyse Keaton (Michael Gross and Meredith Baxter) as they raise their kids -- including Nixon-worshipping son Alex (Michael J. Fox) -- during the conservative 1980s. Fashion-conscious Mallory (Justine Bateman), tomboy Jennifer (Tina Yothers) and cute-kid Andy (Brian Bonsall) -- born into the Keaton clan in Season 3 -- round out the rest of the cast.

The Keaton family continues to use 1960s values to cope with the 1980s in the fourth season of this beloved series. The year begins with a feature-length episode that sends the family to England when Alex is accepted at Oxford. This season also introduces Nick (Scott Valentine), Mallory's dim-witted artist boyfriend, whose influence rankles Steven and Elyse, and Alex's girlfriend, Ellen, played by Tracy Pollan, the future Mrs. Michael J. Fox.

Steven (Michael Gross), Elyse (Meredith Baxter) and the rest of the Keaton clan -- including son Alex, played by breakout star Michael J. Fox -- return for a fifth season of the popular Emmy Award-winning series. In highlights from this season, Steven considers reestablishing a left-wing paper he worked before he became a family man; Nick and Mallory cause a stir when it's revealed that they plan to elope; and Uncle Rob arrives with bad news.

Parents need to know that this classic '80s sitcom centers on a strong family headed by loving parents who happily share domestic duties. Much of the show's humor stems from the personality differences among the family members, but despite many disagreements, the parents support their kids and encourage them to express their views. Some episodes touch on serious issues like teen pregnancy, grief, extramarital affairs, and crime, but they're all addressed in an honest, thoughtful manner.

Some kissing between a husband and wife as well as teen couples. Some storylines touch on sexual topics like teen pregnancy and extramarital affairs. Mallory is obsessed with being popular and having a boyfriend, so she often talks about guys being cute.

The importance of family and respecting other people's points of view are underscored here.

Some storylines center on issues like underage drinking, alcoholism, and drug abuse, but the messages are always positive and honest.