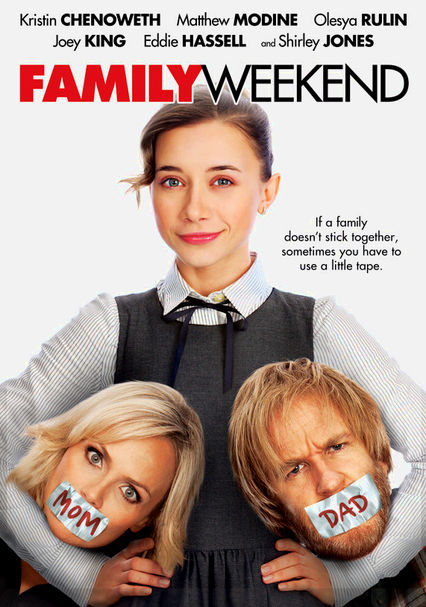 2013 R 1h 46m DVD
After her preoccupied parents fail to attend her jump-rope competition, 16-year-old Emily Smith-Dungy decides to hold them hostage until they change their attitude. But her plan hits a snag when the police step in.

Parents need to know that Family Weekend delivers a simple and important message about parents who realize too late that ignoring their children can signficantly damage their family. That said, the takeaway is packaged in a comedy/drama that centers on teenage Emily, who drives it home with some pretty questionable methods: She drugs her mom and dad, ties them to chairs, and spends two days trying to teach them the error of their ways. There's some violence (the tying up, someone getting hit over the head), some sexual references (including a character who collects both gay and straight porn magazines), and moderate swearing (including "f--k" and "s--t"), a character smoking a joint in one scene, and a meal with some unusually potent wine.

A teen drugs her mom and dad and then ties them up; they spend the weekend subdued while she tries to force them to become better parents. A girl hits an adult over the head with a trophy, knocking him unconscious.

The parents are initially distracted and self-centered, but they slowly realize how much they've ignored their children and neglected their marriage. Once they do, they discover that they can -- and will -- repair the damage.

Some characters use BlackBerry and Apple mobile phones. Several references to classic films.

Adults drink wine at dinner. One character smokes a joint.