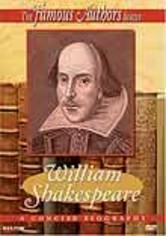 1996 NR 0h 30m DVD
An immortal figure in English literature, William Shakespeare wrote dozens of plays, sonnets and other poems. He began his career as an actor, joining the theatrical company that built and operated the Globe Theatre in London. He soon began writing plays, enjoying huge success and popularity in his day. Through period documents, artwork and other archival material, this program traces the life and work of the Bard.