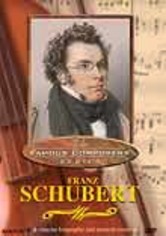 1996 NR 0h 35m DVD
Widely regarded as one of the greatest musical minds of the 19th century, Franz Schubert composed more than 300 sonatas, trios, quartets and quintets; more than 600 romantic lieder; and nine symphonies before his tragic early death at the age of 31. Filmed on location in Schubert's native Austria, this absorbing program explores his life and puts the works of the prolific creative genius in social and historical context.