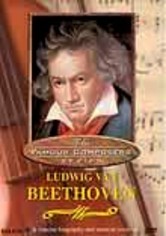 1996 NR 0h 35m DVD
Known as much for the richness of his symphonies, concertos, sonatas and chamber music as he is for his personal struggles (including deafness), Ludwig van Beethoven is undoubtedly one of the most accomplished musicians of all time. As part of a comprehensive series of films celebrating the most influential European composers on record, this educational program is as much an introduction to Beethoven's works as it is a tribute to his genius.