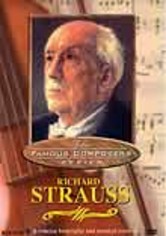 1996 NR 0h 35m DVD
Remembered as much for his tone poems ("Thus Spake Zarathustra" and "Don Quixote") as for his operas ("Salome" and "Elektra"), Richard Strauss rose to fame in part because his wife -- soprano Pauline de Ahna -- encouraged him to write music. This educational program, part of a comprehensive series of films celebrating the most influential European composers on record, chronicles the progression of Strauss's fascinating career.