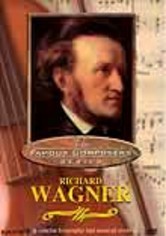 1996 NR 0h 35m DVD
Although he's now often parodied for his dark and dramatic operas based on German myth, Richard Wagner was considered quite controversial in his own time, stunning opera-goers with a bold new style he called Gesamtkunstwerk. As part of a comprehensive series of films celebrating the most influential European composers on record, this educational program is as much an introduction to Wagner's works as it is a tribute to his genius.