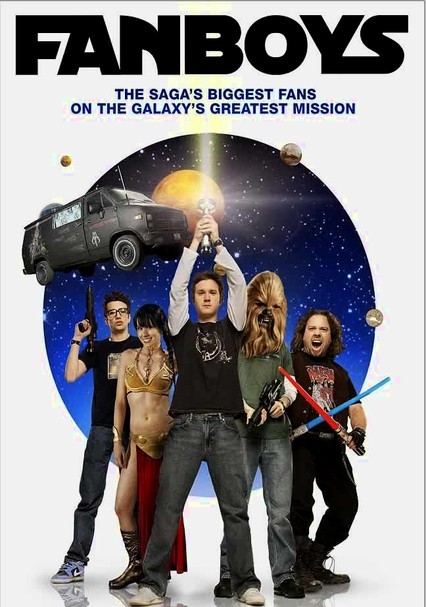 2008 PG-13 1h 30m DVD
A group of friends has waited years for the release of Star Wars: Episode I: The Phantom Menace. But when one of them discovers he's terminally ill, they embark on a road trip to Skywalker Ranch to steal the long-anticipated film.

Parents need to know that this Star Wars-centered comedy really pushes the limits for PG-13, with lots of swearing (including "f--k" and "s--t"), drinking, smoking, and sexual content (particularly discussions of sex and sex acts, though naked butts are also shown). That said, under all the rude and crude comedy is a message about friendship and believing in something.

Nude buttocks, both male and female, are shown as passersby are "mooned"; other implied nudity. Sexual situations (kissing, etc) -- both in the context of a relationship and with young women who turn out to be escorts. A young man meets face-to-face with his "cyber girlfriend," only to discoverthat she's approximately 10 years old ("I'm a pedophile," he shrieks). Many digressions about sex, sex acts, sexual conduct, and sexual prowess. A gay bar is depicted as a den of iniquity. A joke revolves around male homosexual prostitution.

Comedic scuffling and flailing, mostly ineffectual and inept. Some mock-martial arts action and weapons violence (quarterstaff combat, science-fiction replica weapons), all for comedic effect. A man is hurled from a van; a van drives toward people on foot.

There's a message about friendship hiding here (the lead characters are willing to do anything for a terminally ill friend), but it's overshadowed by plenty of iffy stuff. On the up side, a real, sincere relationship blossoms between two of the leads -- in contrast to less meaningful dalliances and attractions -- but women are also fairly marginalized characters overall.

The entire film revolves around a group's quest to see Star Wars: Episode I: The Phantom Menace prior to its release; the movie is a constant series of references to the fantasy-world myths and real-world genesis of the Star Wars saga. Other brands mentioned or shown include Star Trek; iPhone; Palm Pilot; The Rocketeer; Top Gun; Paramount/Viacom; Lucasfilm; Six Days, Seven Nights; Raiders of the Lost Ark; Batman; Priceline; and many more.

Characters drink beer and hard liquor to excess; scenes take place in bars. Characters smoke cigars and cigarettes and are given Peyote-laced guacamole; a terminally ill character is given a large amount of Peyote. Prescription drugs are administered by a physician.