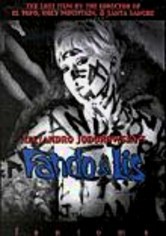 1994 NR 3h 2m DVD
Chilean director Alejandro Jodorowsky intermingles surreal imagery and bizarre fantasy in this experimental drama. The scattershot plot follows Fando (Sergio Klainer) and his paraplegic girlfriend, Lis (Diana Mariscal), on their mad search for the long-lost city of Tar. Based on a single page of script, the film provoked a riot when it debuted at the 1968 Acapulco Film Festival.Also includes a documentary on Jodorowsky.