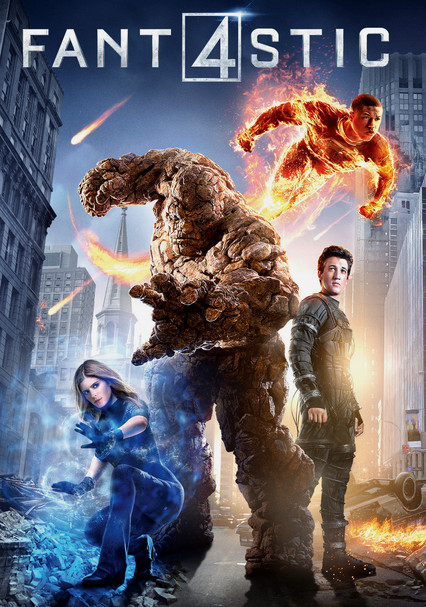 2015 PG-13 1h 40m Blu-ray / DVD
In this updated sci-fi saga about the legendary Fantastic Four, a team of scientists who suddenly acquire superhuman abilities are soon obliged to put them to use when a powerful nemesis with malevolent plans threatens Earth.

Parents need to know that Fantastic Four (2015) is the latest take on the popular Marvel comic book, coming about 10 years after the last FF adaptation. Unlike the previous version, this one features a much younger version of the heroes and stars four actors with lots of teen appeal: Miles Teller as Reed Richards, Kate Mara as Sue Storm, Michael B. Jordan as Johnny Storm, and Jamie Bell as Ben Grimm. Things get explosive, but there's a bit less violence than in many other Marvel-based adaptations -- until the very end, when there are multiple deaths, some of them fairly gory (the villain makes heads explode, shoots people, and otherwise kills and injures people, almost solely with his mind). The heroes' transformation scene is also intense, and The Thing is used as a military weapon, killing dozens. Strong language is occasional and includes "s--t," "ass," "damn," and the like, and while there's some (presumably) underage drinking, for once there's virtually no romance beyond a few flirtatious remarks and longing looks. The four main characters work together, sending messages of teamwork and trust.

Loaded looks and some flirting, but no actual romance or sex.

The villain kills dozens of people, some of them in a graphic manner, with blood splattering on the wall or heads exploding. Characters are killed in all sorts of ways. The Thing is used as a military weapon and has dozens of confirmed kills attributed to him. The transformation scene is intense, and one character is presumably killed. A guy beats up his little brother until his mother intervenes and starts hitting him. Explosive sci-fi action violence.

Promotes teamwork and trusting young people to rise to the occasion and believe in their work.

The guys, who are all presumably around 18, drink a lot and make unwise decisions as a result.