Far Side of the Moon 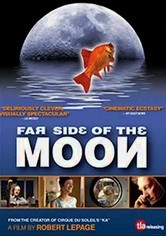 Far Side of the Moon

2003 NR 1h 45m DVD
Writer-director Robert Lepage stars in this touching comedy about two brothers (both played by Lepage) who are polar opposites. Philippe is a Ph.D. who's broke and barely able to make ends meet, while Andre, a TV reporter, draws a handsome salary and leads a fabulous life. But the death of their mother prompts Philippe to rekindle his neglected relationship with his estranged sibling, though just how successful he'll be is anyone's guess.